As a Saints fan I'll come right out with this, Sean Payton is staying in New Orleans. For those of you paying attention to the end of their season, the New Orleans Saints won 3 of their last 4 games. What changed during that span was the defensive coordinator, from Rob Ryan to Dennis Allen. Despite massive injuries on defense, that simple coaching change made a huge difference. The Saints have always given coaches and players to "long of a leash" which usually hurts the team. Well, most team don't operate with such a long leash, as you're about to find out, and the changes on the horizon will play a major role on the 2016 fantasy football draft. I'll update this article as news becomes available and when the dust settles I'll give you the fantasy spin on all matters.

Cleveland Browns: Head coach Mike Pettine was fired soon after the team's Week 17 loss to Pittsburgh. Pettine was 10-22 as Cleveland's coach but I don't think he had enough time to rebuild, or should I say continue to build, the Browns. The Browns have had 22 different quarterbacks under center since 1999, that's pretty darn bad guys.  I'm not sure you can rest the Browns woes on the coach or GM. On a positive note the Browns named former New York Mets executive Paul DePodesta as Chief Strategy Officer.

Tampa Bay Buccaneers: The Buccaneers cut head  coach Lovie Smith sending his 8-24 record over the last two seasons packing. Dirk Koetter (Bucs offensive coordinator) is currently the leading candidate for the job, per general manager Jason Licht. Tampa has a smorgasbord of weapons with loads of upside if they can get the right head coach in the drivers seat.

New York Giants: No surprise here, Tom Coughlin resigned as Giants head coach. Whoever the next head coach is will have a major overhaul on their hands, starting with the defense. I think the Panther defensive coordinator Sean McDermott would be the best choice to get the Giants back on track, he interviews Saturday.

San Francisco 49ers: Now you want to talk about short leashes? The 49ers fired coach Jim Tomsula after just a single season with the team. The Niners went 5-11 with Tomsula at the helm. There's a boat load of suitors but Hue Jackson would be my personal choice. CEO Jed York announced Trent Baalke's job as general manager is not in danger. 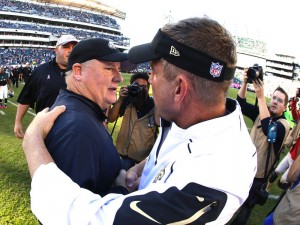 Miami Dolphins: The Dolphins fired their head coach during the NFL season and the interim, Dan Campbell, didn't look like head coach material. The Dolphins continue to play the field with the only significant hiring being former college scouting director Chris Grier as their new general manager, a move that sounds like a major "yes man" reach.

Tennessee Titans: The interim head coach Mike Mularkey didn't win many games but with the young talent on the team now, and in the coming 2016 NFL draft, this is a team on the rise. Seeing as how the Titans are searching for a GM right now I'm pretty sure Mularkey isn't going to be the future head coach.

Detroit Lions: The Lions are in search of a new general manager. This puts Jim Caldwell squarely on the block. But if the interim GM Sheldon White is hired I think we'll see another season with Caldwell.