Myself and a motley crew of crazy fantasy "gurus" got together for a quick mock draft. The goal, to present our readers with a draft strategy article for each draft position in a 12 team PPR draft. While most of you would think the 3rd overall pick is a great place to be, I'll pass on any picks not labeled 5th, 6th or 7th. More on my issues with early/late draft picks later. Before we begin let me set the stage. This is for a 12 team PPR league. I have the 3rd pick in the draft. The pick timer was set to 30 seconds (which is really tough when picking early or late) and we only drafted for 12 rounds. 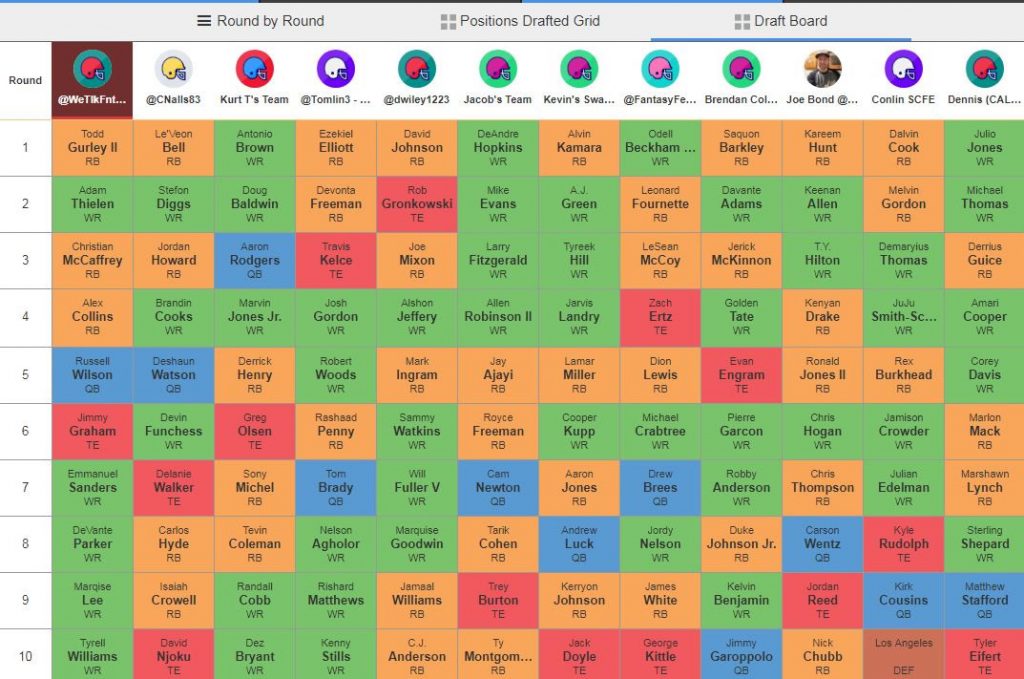 Why This Draft Was Unique

Outside of the 30 second timer this draft was unique in that the top tier quarterbacks didn't get drafted anywhere near their ADP. I haven't seen quarterbacks drop like this in a couple years. I'm assuming it's because last season was a down season for quarterbacks overall. But at the end of the day this is a passing league and I expect the fantasy points to be accumulated via the air more so this season than last. Look no further than 2015 and 2016 for examples. 2017 was just a down year.

What I learned: Don't fear position runs before they happen. If you draft a position like TE or QB because you're worried a run will take place before your next pick and the run doesn't happen, you can be stuck at a disadvantage because you don't want the 1st QB or TE off the board, unless they drop outside of ADP. The idea is to pass on QB and TE for as long as possible, not be the first to grab a top tier QB or TE.

Here's My Team From No. 3 Overall

None: This isn't a typical Kurt Turner drafted team. I never go full out first 2 picks WR. You just can't get away with it and win without help from RB later in the draft. I may have pulled it off with Michel and Henry but I'm really not feeling it. Word to the wise, RB in the first round if you can get a 3 down back, no matter what.

Aaron Rodgers: He won't disappoint or anything but I only drafted him out of fear of a position run. And since that position run didn't take place it screwed up my plots and forced my hand down a road less traveled.

Player Who Could Make or Break My Team

Sony Michel / Derrick Henry: I need one of these guys to finish as a top 12 running back. The other guy needs to finish top 20. If this happen I think this is a playoff team.

Typically you'll draft 14 to 18 players, not 12. With my bench picks I could have taken a lot more chances at RB late to really make this team shine. I have over 100 late round sleepers for you to choose from in my draft guide. People that purchase usually come back the following season and please don't forget about my playoff guarantee. Hit me up @_Knuckleheads.