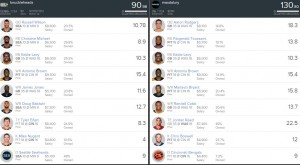 Breaking down DFS lineups can help you fine tune your strategy by gleaning gold nuggets of information from the successful processes used by known winners. During the NFL wildcard games (week 18) I entered two GPP tournaments and Maxdalury placed ahead of me in both. For those of you not paying attention to professional DFS player Saahil Sud, aka Maxdalury, he's one of the top players in daily fantasy sports. He ranked in the top 5 of 5 different sports in 2015 and I consistently see him placing in the top 40 of most GPP slates I enter. I decided to extract all of his lineups for one of the slates and break it down in an effort to learn from one of the most respected players in the DFS industry. Since I don't usually play DFS slates with a low number of teams represented my hopes are I'll be able to use what I glean from Max and generate some profit this weekend during the Divisional Round of the NFL Playoffs. For comparisons sake I'll also analyze jrs8771 who entered the second most lineups.

If you're wondering if entering multiple lineups helps you hit pay dirt then the answer is obviously yes! The below chart identifies all participants in this slate that entered 6 or more lineups. Everyone that entered 6 or more lineups won money. I don't expect your results to be similar but perhaps breaking down the player selections for jrs7881 and maxdalury will make you aware of some key winning factors, more on that later.

Maxdalury obviously used a small player pool to optimize against, something I have recommend numerous times for several years now. 20 players are used in 37 entries with only minor changes between each of his lineups. He liked Rodgers a lot at quarterback, selecting him for every single lineup he entered. He showed less confidence in RB, choosing 4 different running backs with Eddie Lacy in all but 2 of his 37 entries. The other backs had a fairly even distribution which I believe is representative of his confidence in their ability to out produce their value. Of the four wide receivers he played here's the breakdown: Brown 37, Green 27, Cobb 24 and Bryant 23. At TE he used a whopping 3 players and 4 at kicker and defense. Clearly this is due to how up and down these positions produce and is very much a part of his winning recipe.

The tables below breaks down the player pools used by Maxdalury and jrs7881. Maxdalury used a player pool of 20 players and jrs7881 used a total of 30, that's a whopping 33% more players. Max seemed to have a core 4 players he liked a lot and he used them a lot more than any of the other players in the pool. JRS7881 spread it out a lot more giving him more exposure and expressing less confidence than Max with his picks. Maxdalury went with a core group and built around them, that’s the way to take down GPP tournaments. Because if your core players are successful then you’re in line for a sizable rake.

Breaking Down the Lineups

The table below list the lineups for jrs8771 and Maxdulary. It's painfully obvious that Maxdulary isn't worried about putting all his eggs in a just a couple baskets. Every single lineup he generated had a lock on Rodgers and Brown. If either of those players failed miserably it would have really hurt his chances of bring home the bacon. While JRS8771 obviously liked Baldwin and Brown, he varied his lineups much differently than Max. Both players obviously use an optimal lineup tool like ours to create multiple lineups at once.

In the past I've created lineups like Jrs8771 consisting of a player pool of 30 to 40 players and multiple players at each position spread out across multiple lineups. This week I'll be giving Maxdulary's approach a shot. Obviously it's the riskier of the two strategies but doing your homework for the playoffs is so much easier considering we only have 8 teams to choose from. No excuses this week Knuckleheads! Multiple lineups (2% of entries) with a small pool of players (around 20) that you heavily curated is going to be this weeks strategy to hitting pay dirt.