Here we go guys. Week 11 is upon us and I hope your IDP players are playing well if not here are the IDP Waiver Wire Week 11. 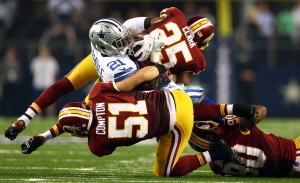 Avery Williamson (TEN): Second year player and starting to play more and more. If you are an a dynasty league he won't be available but if not pick him up as a LB2 right now.

Kwon Alexander (TB): I am all in on this 4th round pick. He didn't have a huge week 10 but I LOVE his potential and he will get you both tackles and big plays! I strongly recommend you pick him as a Low end LB1 with big UPDSIDE!

Will Compton (WAS): I am big homer and I admit it but Will Compton started this past week and played extremely well, he finished with 8 tackles and I think he is in for the starting job in DC vs Carolina which is a great matchup.
Brian Orakpo (TEN): OKAY this is FOR BIG PLAY LEAGUES only! RAK has been on a tear for the past 3 games with 4 sacks and 12 tackles!
AT DL
Shea McClellin (CHI): Okay if you are on ESPN he is listed as DL,LB pick him up NOW (unless you have Chandler/J.J.Watt) and start him at DL. When healthy he will give you the tackles of a LB because that is his true position in Chicago
Linval Joseph (MIN): One of the reasons for Minnesota's great defense is this guy! Past 2 weeks he has 18 tackles, 1.5 sacks, and a forced fumble! He is facing a Green Bay offense that looked fragile for a few weeks now!
Mario Edwards Jr. (OAK): This 2nd round rookie is starting to heat up and had a huge game in week 10. Right now he is a DL2
AT DB
Dashon Goldson (WAS): He might not be available because he is finally playing really well. He is a DB1 if available only Reshad Jones/Corey Graham/Mark Barron are better right now
Bashaud Breeland (WAS): Okay I know there are many Washington guys on my list but believe me there is a valid reason! They are balling! He doesn't have the best matchup in week 11 but he is worthy of CB slot if your league starts them. he is a DB2 at best but CB1
Kurt Coleman (CAR): I predict he will have 2 Kirk Cousins interceptions in week 11!! He has played really well recently and is a DB2
Isa Abdul-Quddus (DET): IF Ihedigbo is a no go next Sunday this guy can be a nice replacement for you. Had a solid game in week 10.
Best of luck to you in week 11
Category - IDP Fantasy Football - IDP Waiver Wire Week 11