What an eventful week 8, a lot of injuries and I hope you came out unscathed. Here are my IDP Waiver Wire Week 9 picks.

Have a great week.

Vontaze Burfict (CIN) He played his first game this season and is a LB1 the rest of the season. He didn't have the best outing with 5 tackles but I expect rust played a part, this week he faces a great matchup vs. the Browns

Kwon Alexander (TB) He had lost his brother just 48 hours prior to the game so he was motivated but I also have liked this rookie in the past. if you are in Keeper or dynasty leagues he might not be available in your waivers and if he is pick him up now.  LB2 this year with LB1 upside
Eric Kendricks (MIN):  I had him as a super hot pick up last week and I still feel the same this week despite an ordinary week with 7 tackles. He has a great matchup this week vs. St Louis 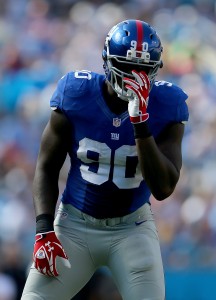 At DL
Jason Pierre Paul (NYG) Right now week 9 looks like a long shot, week 11 is their bye. So I think it will either be week 10 or week 12 after their bye. He is a top talent at DE and if you can roster him do it.
Jared Allen (CAR) You need to pick this veteran up if you start a DL, he is a top 12 talent and has had 2 good games with his new team
Greg  Hardy (DAL) Since his return he has 3 sacks, 12 tackles, 1 INT and a FF and he is still under-owned in too many leagues. If you start a DL and you don't have one of the top 5-7 guys, Hardy is the right guy to pick up
At DB
Bashaud Breeland (WAS) I mentioned him last week but Washington was on bye week so I need to mention him again. Remember in all likelihood WAS gets back both CB this week in Culliver and Hall, however Breeland has been balling and I don't see how Gruden will ignore that. He is a DB2 with DB1 upside, let's wait and see who is in the starting rotation
Jaquiski Tartt (SF) I've liked him since his college days so when my starting S (Bethea) went down I jumped on the opportunity and started him. He got me 6 tackles and a FF! so I won't say no. Right now he is a low end DB2.
Mark Barron (STL) I got a few messages last week when I picked up Mark Barron in all my ESPN leagues as to why I picked him up, he had only 1 good game all year. The answer is simple, when they lost Alec Ogletree for the year, Fisher shifted things and moved Barron from S to LB, and he has excelled in 2 weeks at his new position he has 26 tackles which is on pace with the top LB in the league.
Damarious Randall (GB) Had an amazing game vs. the Broncos. and intercepted his first pass in the NFL. He now has over 2 games, 14 tackles and an INT. Someone to keep an eye on right now a DB3.
Good luck in week 9
Category - IDP Fantasy Football - IDP Waiver Wire Week 9