A good draft isn't just predicated on how successful you are in the first few rounds, it has to be a mixture of playmakers that can step in right away, as well as a few diamonds in the rough that are found in the latter part of the draft. If teams are successful with making every pick count it will make the team successful for years to come. Here is my mock on players that can fill immediate needs for the Steelers to help them win games next year as well as add depth to help them continue winning in the future. Hope you enjoy this Pittsburgh Steelers Mock Draft!! The Steelers need playmakers on both sides of the ball. However, they love getting their defensive backs in the later rounds of the draft. I believe if Eric Ebron and Darqueze Dennard are there, Ebron will be the pick. Ebron is a steal at 15 and would have an instant impact on the Steelers offense. It also makes Ben Roethlisburger happy by giving him the big target he’s wanted since he lost Plaxico Burress.

Stephon Tuitt, a massive defensive end, out of Notre Dame seems to be a popular pick here. That being said I think the Pittsburgh Steelers will expect production right away from their second round pick. Pierre Desir fits that bill and the Steelers love drafting small school corners. i.e. Ike Taylor, Louisiana Lafayette, Cortez Allen, The Citadel, and developing them into the player that fits their scheme. Pierre could step in right away and compete with Taylor and Allen for playing time. He has the size you look for in a prototypical NFL corner. With his explosiveness and long arms he will be a playmaker this secondary desperately needs.

Paul Richardson is a wide out that comes in the mold of what the Pittsburgh Steelers prefer when drafting a wide receiver. He needs to add weight which he should be able to do with his frame without losing speed. He has nice hands and runs his routes very well. He had 83 catches, for 1,343 yards, and 10 touchdowns. His was a very productive player for a bad college football team. Adding depth and picking up another playmaker is what this offense needs.

The Steelers always seem to take an outside linebacker that has potential in the middle rounds of the draft. Hubbard has a lot of potential. Working with Joey Porter could turn that potential into actual talent. He has the size and talent to make an impact on special teams right away while developing into another fierce OLB that the Steelers are known for.

Will Clarke is the type of 3-4 defensive end that fits extremely well in the Pittsburgh Steelers scheme. Clarke is a hard worker who seems to always have energy. He is definitely a sleeper pick and could make a lot of teams pay for passing on him in the draft. He will make Steelers fans reminisce about Aaron Smith and Brett Kiesel, whom they will hopefully bring back. Clarke may take a year or two to develop but the Steelers patience will definitely pay off in the future.

Antone Exum’s experience at cornerback and safety really adds value for him. He is a bigger corner that many teams are coveting after they watched the Seattle Seahawks Richard Sherman dominate wide receivers at the line of scrimmage. Exum would add depth at both corner and safety for the Pittsburgh Steelers and has the talent to develop into a starter. Yes he has had some injury issues in the past but if he can overcome those issues he could be a diamond in the rough that this secondary needs.

Brandon Thomas was sky rocketing up draft boards until he tore his ACL during his pro day. The once projected second day pick will now fall to the 5th round or later. Thomas brings a lot of value by being able to play guard or tackle and will develop nicely under Mike Munchak’s tutelage 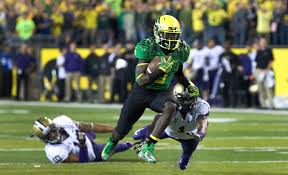 What De’Anthony Thomas lacks in size, he definitely makes up for in speed!! He ran a 4.34 40 at his Oregon pro day!! He is an offensive weapon as long as you can get him in space. He’s not going to break many tackles but he can definitely make people miss. With world class speed he is a dangerous player that can take it to the house at anytime. Could have a Donte Hall like impact in the return game

In the last round of the draft you can always try to find a freakish athlete that may one day turn into an incredible player. Aaron Lynch is a freak of nature with size, speed, and length. He is going to be a project for anyone that drafts him. He seems to have the tools to be a very talented player in the NFL but he has poor work ethic and seems to take plays off. He is a boom or bust pick, maybe new position coach Joey Porter can light a fire in him that will bring out his freakish athleticism