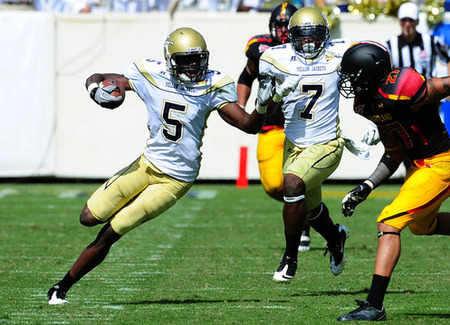 Today I am going to focus on the No. 21 ranked player on my big board for the 2012 NFL Draft.  You can catch a list of my previous scouting reports here.

This report is going to focus on one of the fastest risers in the entire draft,  Stephen Hill from Georgia Tech. Despite being bogged down in a run-happy offense under Paul Johnson at Tech, Hill has one of the best skill sets of any receiver in the draft.

Hill has prototypical size that we look for when scouting a NFL prospect at the receiver position. He stands at 6'5" and has the build to be a completing dominating player on the outside.

Scouting reports may vary in regards to how physical Hill can be at the line, but he seems to get off against press coverage pretty well, consistently throwing defenders off of his route early. This is something that most receiver prospects struggle with.

Considering that Hill stands at 6'5" he is as fast as you can expect from someone his size. The up-and-coming prospect has the ability to break it big down field and gets to his second gear in relatively quick fashion.

Stephen Hill is also an all-around football player. He uses that size to block at the line of scrimmage and down field. He will not shy away from contact after getting hit initially and actually seems to thrive in those situations. Teams are going to be looking at him to help out in that aspect as well.

Hill ran a limited route tree at Georgia Tech, this has to be cause for alarm in regards to his ability to make an immediate impact at the next level. However, he didn't seem to struggle with that in the gauntlet drill at the combine.

He did drop a nice amount of balls last season at Tech. Some of this could have to do with lack of concentration throughout the game due to not seeing a whole lot of balls thrown in his direction.

Extremely raw in terms of route running and will need to be coached up in that aspect during OTA's and training camp. If not, you will see some initial struggles to fully understand the complicated nuances of a non-option offense.

As with most rookie receivers, this depends on where Hill goes in the draft. If he is picked by a team that doesn't have a proven quarterback you are going to see some struggles.

For example, some mock drafts have indicated that Hill is going to go to the Cleveland Browns in the latter half of the first-round. If this happens, shy away from the rookie receiver in your fantasy draft.

However, if he goes to a team like the New England Patriots or St. Louis Rams you can expect some nice production as a rookie. Someone that should be able to tally 50 receptions for 700 yards and at least five touchdowns.