Year after year I remind people to pay attention to the top 3 easiest fantasy football schedules and the top 3 hardest schedules. 2019 is no different. This method has worked well for me over the years and is most certainly meaningful, as I'll explain later.

What the NFL has found to be true in "real football" also holds true in fantasy football. For example, in 2011 we projected Seattle to have the easiest strength of schedule at running back. Lynch went on to have the best year of his career (at the time), posting 1204 rushing yards and 12 rushing touchdowns. We also projected Detroit to have the easiest strength of schedule at quarterback. Matthew Stafford posted record numbers (for the Lions) in his first full season. The Eagles had the third easiest SOS at RB, McCoy posted 17 rushing touch downs and 1309 rushing yards. Year after year strength of schedule plays a factor in fantasy football. It's not something you build your entire team around but it does play a role in projections and coin toss scenarios.

Strength of Schedule For 2020

Positions included are the common positions used in fantasy football including: quarterback, wide receiver, tight end, running back, kicker, defensive back, defensive lineman, linebacker, safety and team defense. Usually, I only bump a players projection up a notch if they have the 1st, 2nd or 3rd easiest schedule. I use the same simple logic when moving a player down a few spots if they have the 30th, 31st or 32nd hardest schedule. In the table below, the number "1" indicates the easiest schedule and a number "32" indicates the hardest schedule. 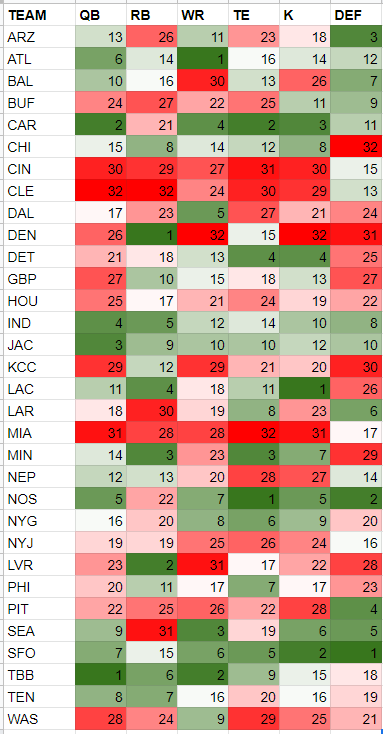 Drafting and Strength of Schedule