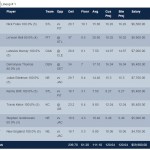 We’re working on an ownership projection algorithm and hope to have it released soon. Because of this I’ve been playing a lot more GPP tournaments than usual this season and I’ve been getting lucky. With that said, let’s talk about the week 3 FanDuel GPP tournaments and optimal lineup construction. When playing GPP correctly, you’re going to […]