During this particular day in age where social networking literally can make or break a certain player in a big game, just like what has happened in numerous Super Bowls. Great players throughout NFL history have had careers that have put them in the Hall of Fame, but the one thing that every NFL player wants before they retire is a chance to play for the Lombardi Trophy.

Here is a list of the top 10 biggest blunders in the biggest game each and every year.

This was not exactly considered a blunder in the NFL, but when Mike Jones tackled Kevin Dyson a yard short of the end zone and gave the Rams a 23-16 Super Bowl victory, it was the closest Super Bowl in the history of the NFL; no Super Bowl had ever ended on such a short yardage play where a tackle was made to save the game. No Super Bowl had ever gone to overtime and that was probably the closest we have ever come to seeing that spectacle reach that plateau.

This Super Bowl will always be remembered for Jerome Bettis and Bill Cowher winning their first Super Bowl rings, but in Seattle, this Super Bowl will only be remembered for missed opportunities… especially on the officiating side. A few pass interference and holding calls kept Seattle from even being in the game on that day and it all ended with a Matt Hasselbeck interception and the Lombardi Trophy going to the Steel City.

Pittsburgh outgains Dallas in total yardage and first downs, but two 2nd half interceptions from Neil O’Donnell [who had the NFL lead in interceptions per attempt in the regular season] led to big chunks of yards for the Cowboys defense and put their offense in a position where they ended up winning the game 27-17.

This Super Bowl put the Tampa Bay Buccaneers versus the Oakland Raiders, and the important thing to know about this game was the fact that the Raiders former coach, was on the other sideline helping the Bucs put all their decades of woes behind them and lead their defense to help them win the Super Bowl. On this day, Rich Gannon, who literally had an unbelievable regular season, threw 5 interceptions [3 of them returned for TDs] and basically gave any chance the Raiders had to win it all away to the Bucs defense.

The Undefeated New England Patriots were facing the low seeded, wildcard New York Giants in a Super Bowl that everyone that was over before it started. Everyone who watched this game remembered a few different plays as the key to the Giants colossal upset; but the play that everyone seems to forget is the Asante Samuel dropped interception the play before David Tyree made the craziest helmet catch in the history of the Super Bowl. This “catch” by Samuel would have without a doubt ended the game and would have given the Patriots their undefeated season.

This Super Bowl put the Redskins versus the Raiders, back in the day when Joe Gibbs was the head coach and Joe Theismann was the quarterback of the Redskins. The title of this blunder has to be “Rocket Screen” because when Joe Gibbs made the play call on their own 12-yard line, the face of the entire game changed in just a few seconds. The play had worked for the Redskins earlier in the season against this same Raiders team, but this time John Madden was ready for it and Jack Squirek [only one INT in the regular season in his career] was ready for it, returned it for a touchdown and the Redskins could never recover.

The Arizona Cardinals and the Pittsburgh Steelers played in this Super Bowl and it ended up being one of the closest championship games in the history of the NFL. The play that changed the game though happened right before halftime when James Harrison picked off a slant pass by Kurt Warner, but what has to be remembered about that moment is two things: James Harrison knocked down at least 9 guys in his 100 yards across the field for a touchdown and the Cardinals were only down 10-7 looking to take the lead and ended up going into the half now down 17-7; it was a total game changer.

With just over a minute left in the game, the Panthers had just tied the score up with the Patriots 29-29 and all John Kasay had to do was kick ball in bounds on the kickoff; but what happened next, could have honestly changed the face of the NFL for years to come. Kasay kicked the ball out of bounds and gave the Patriots the ball on their own 40-yard line with plenty of time to start the dynasty that we have now in New England. 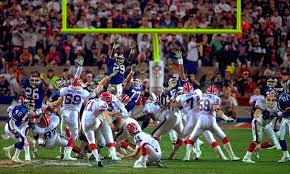 The name Scott Norwood and the saying wide right will never be the same. In Buffalo, the name Scott Norwood is probably worse than the name Bill Buckner in Boston or Chris Webber in Ann Arbor, it puts a cringe on the face of everyone you mention it to. The situation was Giants lead 20-19, Norwood sets up for a 47-yard field goal for the victory, ball sails wide right, Bills then lose three more consecutive Super Bowls and never get any closer to the win than this kick by Scott Norwood.