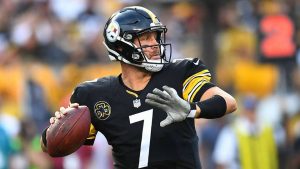 Week 1 is over and if you had Michael Thomas, Tyreek Hill, Alvin Karama or Ryan Fitzpatrick in your lineups, you probably saw some green. Let's see if we can do that again in week 2! Here's my core player pool headed into week 2. I've also listed out some punt plays and stacks to help dominate some tournaments.

These are simply the players with the best matchups for week 2. Fitzpatrick reminded everyone last week why matchups are usually most important in daily fantasy. Big Ben was horrendous last week, but he's back to his home field advantage this week against a susceptible Chiefs secondary.

Gurley and Conner are obvious plays this week, but sometimes you don’t need to overthink it. Freeman against the Raiders should be underappreciated after his dud last week. Chris Thompson looks explosive and the Colts defense is a mess.

Gordon hardly played last week, but his matchup against the Saints who were destroyed by Fitzmagic is enticing. Hopkins had a bit of a disappointing game for his standards but is in a good spot to bounce back. Sanders is Keenum’s favorite target and has another good matchup against the Raiders this week.

Seals-Jones played 92 percent of the snaps last week and gets the team who was just eaten alive by Jared Cook. Jonnu Smith is the next man up after Walker’s injury and could have some sleeper potential in a good matchup with the Texans. Jared Cook will be the chalk play this week, but you could do worse. Jordan Reed looked sharp in his debut. Start everyone against the hapless Colts defense.

With the uncertainty surrounding Josh Allen, his ownership should be low. He is also the cheapest priced starting QB in the league. Bradford had an awful game last week but has the players to take advantage of the Rams linebacker group.

The Bucs were killed through the air by Kamara so the Eagles scatback could have some appeal as a cheap punt. Richard was the back of choice when the Raiders were in catch-up mode. If Denver jumps out to an early lead, Richard could see some extra touches. Gillislee was miserable last week, but a positive game script against the Browns could help his Week 2 value.

The Colts defense is awful. I feel like I’ve said that a hundred times here today. Doctson is always one big play away and with a shootout in the realm of possibilities, could be a huge play. Williams looked good last week and Buffalo couldn’t stop anybody. That makes for an intriguing matchup at his low price. Golden Tate feasted on the Jets from the slot. Amendola is next up from that position and could provide a security blanket for Tannehill this week. Sutton is the cheapest way to get in against the Raiders this week, a game that I want a piece of.

ASJ had a touchdown called back last week. Again. He seems to have the worst luck in that regard. If this game against the Patriots goes anything like it did in the playoffs last year, there should be a lot of passes thrown. Jordan Reed diced up the Cardinals last week. Maybe Everett does the same this week. He compares favorably to Reed, and McVay knows how to use tight ends. Olsen went down and Ian Thomas is the next man up. It doesn’t look like a good matchup on paper, but Cam loves his tight ends.

Make sure you follow me on twitter @fkz_David for more tips and my optimal lineups on Sunday mornings!