In yesterday’s article, we took a look at some week 5 Fanduel and DraftKings value picks. Today, let’s have a look at some week 5 DFS stacks which have the potential to fill up the stat sheet. The concept of a “stack” is commonly used in tournament play. The idea is to stack a quarterback and receiver (or occasionally TE or even RB) from the same team who have a particularly good matchup or opportunity to produce a strong fantasy outing. A good example would be Tom Brady and Rob Gronkowski in weeks 1-2, or Aaron Rodgers/Randall Cobb or Andy Dalton/AJ Green in week 3.

With each passing week, we learn more about the fantasy landscape. Last week, I went against the JockJournal recommendation of a Vick/Brown stack and… voila! Michael Vick is still a terrible NFL QB. I was literally mere inches from missing on the Bradford/Matthews stack and like them again this week, as we’ll see…

One problem with playing a stack against the Bears is that Chicago doesn’t give up a ton of yardage. In large part, this is because of the Bears’ generally conservative approach on offense; John Fox’s goal is to dominate time of possession and run, run, and run some more. That said, I think an Alex Smith/Jeremy Maclin stack isn’t all that terrible. Maclin has put together back-to-back weeks and the Bears give up TDs to opposing WRs at an alarming rate -- 8 in 4 weeks. And if you take the Seahawks game out of it (where Jimmy Graham caught a receiving TD), that’s 8 in 3 weeks.

The only team that gives up more points to opposing passers than the Chiefs, meanwhile, is New Orleans. Bradford finally came to life last week and Matthews should have had a touchdown, again. Instead, Miles Austin and Riley Cooper caught a couple of long ones. Matthews is still the receiver to own and the matchup is another great one.

Yeah, that’s a QB/RB stack. Johnson caught nine passes last week! Including a touchdown! If you read yesterday’s value column you probably saw this one coming. Duke is a very capable pass-catcher and Cleveland has found a way to use him efficiently and effectively, to the glory of PPR fantasy owners. A lot of Johnson’s routes are short, so the yardage totals may be down unless he can break one, but 6-7 catches is a fantastic starting point. McCown is coming off back-to-back 300+ yard passing games and gets the Ravens, who have been stout enough against the run but not so fantastic against the pass. 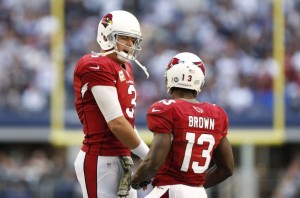 I have no issue with a Palmer/Larry Fitzgerald stack, but John Brown is interesting to me this week for two reasons: 1) he just had his best game of the week in week 4, and the continued development of his rapport with Carson Palmer should result in even better days ahead and 2) Detroit ranks in the bottom-10 against the pass. Again, I think Palmer and either Arizona receiver is a decent play, but Brown has nice upside and a potentially low usage rate.

Wright has had two fantastic games and one clunker, so it’s fair to ask in week five (after a week 4 bye) will the real Kendall Wright please stand up? I think he’s actually a very underrated option and his PPR numbers - he has 13 catches through 3 games - will only increase. Don’t let the matchup with Buffalo scare you either, the only two teams that have given up more points to opposing receivers in PPR formats are the Cleveland Browns and the Kansas City Chiefs. That makes the Bills the 3rd-easiest defense for opposing WRs to score on. As for Mariota, he has actually been remarkably consistent with 2+ scores in each of his first three games. Coming out of the bye at home I think he can have another serviceable week.