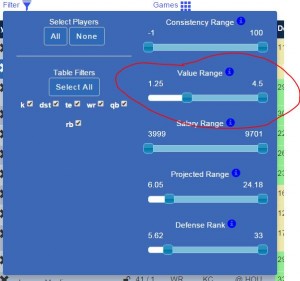 Last week, I hit on 8.5/10 position-play Draftkings and Fanduel value picks. The key to value picks is that they supplement the expensive players you slot into your lineup. In other words, you don’t want to get cute and create a DFS lineup solely chock full of “value” players, but instead sprinkle them in accordingly. I’m counting Duke Johnson Jr. as my “half” since he left the game early due to injury. Maybe that’s cheating, but hey, it was a gutsy call against the Broncos.

SORRY, THE REST OF THIS CONTENT IS FOR MEMBERS ONLY