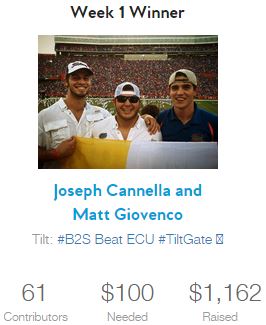 I've been using Tilt to collect dues from large groups for several years with great success. Everything from tailgates to draft parties and anything else where collecting cash from groups of people is required. They're offering a great promotion this year where organizers (people like you trying to collect dues/money) have a chance to win some great prizes, read all about Tilt's tailgate promotion here.

My experience with Tilt has been great. Since 2012 I've been using them to collect funds from groups of people that don't live near me. Here's what I like most:

Getting back to Tilts Tailgate promotion, here's the items up for grabs in their tailgate pack.