With the NFL Draft firmly in our rear-view mirror it is time to dig into Dynasty Fantasy Football in order to start breaking down the rookie draft class, specifically the quarterback position.  The NFL has slowly began to drift away from the rock 'em sock 'em style in which running backs saw 30+ carries a game and dominated the early rounds of fantasy drafts.  The league has evolved into a passers league in which QBs and wide receivers have taken their rightful place among the league's elite players on draft day.

Taking a look at the 2013 NFL rookie quarterback class I will breakdown the Top 5 gunslingers to keep your eye on in the upcoming months in order to see if they move up or down the depth charts of their respective teams.

If you are expecting to draft the next Cam Newton, RG III, Andrew Luck, Russell Wilson or even Andy Dalton, you need to lower your expectations.  This current class of signal-callers are much more a work in progress than the aforementioned quarterbacks.

Looking upon this class, keep in mind that the opportunity means just as much as their talent level and/or draft position, in most fantasy scenarios.  Quite often a rookie quarterback will find himself sitting behind an established veteran starter, just waiting for his opportunity (Colin Kaepernick ring a bell?).  So, these rankings not only take a look at who can break into the fantasy realm, but also find and sustain success.

Without further adieu, let's take a  look at the 2013 NFL Top 5 rookie quarterbacks in regards to Dynasty Fantasy Football.

Being the only QB drafted in the opening round, the Buffalo Bills put this kid under a microscope prior to him taking his first snap in OTA's.  Many experts questioned Buffalo's pick, feeling he would of been there in round 2; however, moving past that I like E.J. Manuel's long-term potential.  He has tremendous athletic ability and a very strong arm.

Ideally he will be given some time initially to learn the system, but playing behind Kevin Kolb anything is possible and he could find himself starting some games come the end of the season.  Teaming with C.J. Spiller in the future will give them a unique and dynamic offense.  The arrow is pointing up on this kid.

I like Manuel’s long-term potential. He has tremendous athletic ability and a strong arm. He will get to learn the system as Kevin Kolb will likely be the initial starter. Manuel could possibly get a shot towards the end of the year as the Bills play their way out of contention. He’ll eventually team with C.J. Spiller to give the Bills a dynamic offense. I like his long-term potential more than any other quarterback in this class.

Geno Smith, the one-time sure thing, saw his stock began to fall rather quickly at the end of last season as scouts began to look deeper into how he accumulated a lot of his gaudy passing statistics.  Geno finds himself in a less than ideal situation playing in New York spotlight on a team that has a plethora of other QBs on their roster; however, those are other QBs are Mark Sanchez, David Garrard, Greg McElroy and Matt Simms.  Nothing to write home about.

Rex Ryan says it will be an open competition, but in all reality this is now Smith's job to lose.  Mark Sanchez and all of his bad money will likely be joining Tim Tebow in the unemployment line sooner than he would like to believe.  Geno is not exactly surrounded with talent either, but his combination of athleticism and arm strength suit today's NFL style of play.  If he is not on your radar in dynasty leagues, he should be.

The California kid, Matt Barkley, was one of the most highly decorated athletes coming out of high school being named 2007 football Gatorade National Player of the Year, and then the 2007 Gatorade national male athlete of the year, becoming the first non-senior to win both awards.

He will most likely find himself third on the Eagles depth chart behind Michael Vick and Nick Foles with Dennis Dixon also in the mix; however, given Vick's style of play, I would bet money that one of these QBs has the opportunity behind center before this year comes to a close.  Realistically, Barkley will spend this year learning, but will find that it is ultimately his job for the taking in 2014.  With a creative coach in Chip Kelly and more than enough firepower on the roster, he becomes an intriguing option in dynasty leagues. The Raiders will more than likely give Matt Flynn every opportunity to win the quarterback job, but I would not be surprised if Tyler Wilson gains an opportunity to see the field in the future.

Following his junior year, Wilson was considered one of the top prospects after throwing 24 touchdown passes and only six interceptions while leading Arkansas to an 11-2 record in 2011.  He made the decision to stay for his senior season in an effort to improve upon those numbers, but found his draft status fall as the team struggled following the firing of former coach Bobby Petrino.  Wilson completed 62.1 percent of his passes while throwing for 3,387 yards with 21 touchdowns and 13 interceptions last season.

Both Flynn and Terrelle Pryor are unproven commodities which is why he lands in the top five list of dynasty rookie quarterbacks.

Mike Glennon is not be viewed as immediate competition for Bucs' Josh Freeman and head coach Greg Schiano has made that pretty clear.  Glennon is more likely to sit back, watch-and-learn as most rookies are called upon to do.

Freeman and Dan Orlovsky, both have one year remaining on their contracts, thus Glennon could find himself pushing for playing time in 2014.

Glennon completed over 58 percent of his passes for 4,031 yards, 31 touchdowns and 17 interceptions for the Wolfpack as a senior.  While he has little to no value in fantasy re-draft leagues, he does bring a set skills and a favorable position on a team looking to increase competition at every position.  Therein lies the value in dynasty leagues. 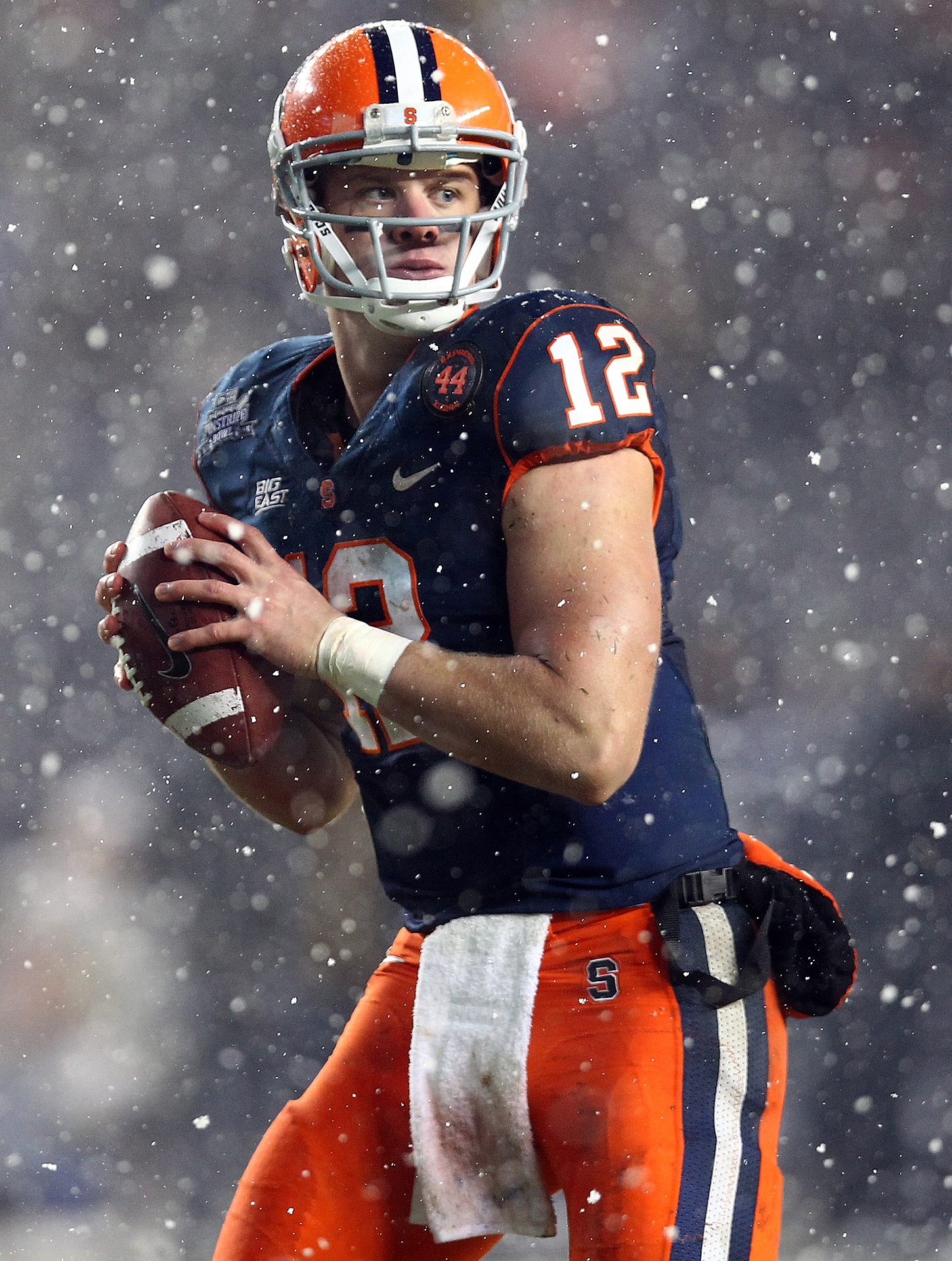