There are some of us preparing to draft a team where players score fantasy points for every first down. In most cases receiving and rushing first downs will net you a full point or half point. I've never played in a point per first down (PPFD) league but I'm participating in the Scott Fish Bowl (SFB7) this season and thought I'd try to prepare just a little bit. Scott has it set up where you're awarded a point per first down reception as well as rushing. And as if it couldn't get any crazier tight ends get a full extra point per first down.

Which Position Is More Valuable? 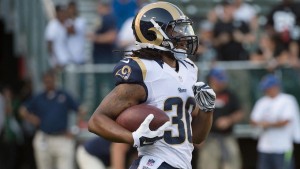 On average, points per first down reception increases the amount of points scored for RB by 7%, WR by 33%, and TE by 34%, when compared to standard leagues. For the SFB we must also consider the points per rushing first down. As you can see on sporting charts your workhorse running backs are going to net you an additional 60-70 fantasy points from rushing first downs, or about 4 more points per game.

Your cowbell 3 down back is an absolute goldmine in a point per first down league. Here are the tier 1 guys I'm taking with my first pick, regardless of who is on the board including Brown and Jones.

No matter what scoring format, the tight end position has a very small group of elite players you may choose from during the draft. Just call me captain obvious. In all seriousness, even with tight ends getting a full extra point per first down that isn't going to change my outlook so much. I'll still be looking for tight end in the later rounds unless Olsen or Kelce drop to me. I was in a SFB7 mock draft last week and Kelce fell to me late in the 4th round. He is a first down machine in KC and one of the more consistent guys year after year. So rather than wait until the later round for a tight end I went ahead and pounced.

Wide Receivers Are Where You Earn Your Keep

Want to make the playoffs in a point per first down league? Study those wide receivers and have more than just a couple mid and late round picks on your radar. I'm looking for wideouts that play in the X spot and in the later rounds I'll target young and emerging threats. Here's a list of 3rd year wide receivers you should consider.

The guys that have scored the most points per game in the plot below are the same ones that score the most in touchdown only leagues and PPR leagues. Outside of Jones and Brown, does it really matter? Do you have a crystal ball? Then don't over pay at wide receiver because you're better off with 2x three down backs. And don't forget, the Scott Fish Bowl is a 2 quarterback league. This means you're probably going to end up having to draft your quarterbacks earlier than usual but every draft is different. Your best bet for consistent average production is going to be in the mid to late rounds at wide receiver. If the running backs and quarterbacks I want fall to me then I can see myself going for consistency at WR. Meaning, I'm not looking for my WR's to put up 20+ point bombs each week.