This MFL10 strategy guide was updated to reflect the available players for the 2016 NFL season and covers the strategy that will net you the most points in "best ball formats", the format used in MFL10 leagues. If you're not familiar with MFL10's they are ran by myfantasyleague.com and a $10 entry gets you into a draft only best ball league, winner takes all. I'm not an affiliate so I'm not promoting MFL10's for my benefit, they are just an awesome way to get the draft experience without the headache of weekly league management. MFL10's are "best ball" leagues where your top scoring players are the one's that are recorded for the allowed number of starters at each position.

All About The Best Ball Format 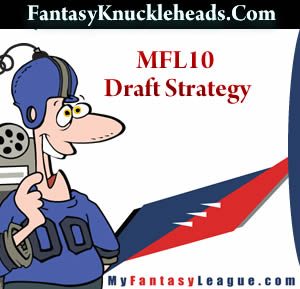 leagues are all the rage, which is why we're seeing more and more fantasy football players swarming to MFL10 leagues. The concept is simple, your best scoring players will be counted as the final score when the week has concluded. For instance, there is 1 QB slot and you have 3 quarterbacks on your team, the one that scores the most will count as your quarterback this week. Simple enough, right? Well not so fast, while you don't need to worry about setting your roster you do need to pay particular attention to the draft as it's the only element of concern in MFL10 leagues. Your strategy needs to be centered around drafting players with a higher weekly ceiling rather than those with high weekly floors. The "ceiling" is the most points you can expect out of a player where the "floor" is the lowest you can expect. In simpler terms, you'll want some players that have the propensity to "go off" on any given week and score about 30 to 40 fantasy points. While in standard leagues your strategy is centered around consistent reliable fantasy production (high weekly floors). Rankings for MFL10 leagues will be similar to redraft PPR rankings but you need to target those feast or famine players in the later rounds where as in my typical full season leagues targeting sleepers in the later rounds.

As with any draft strategy you must play close attention to ADP. My Fantasy League shows us 2016 ADP based on MFL10's here. The most glaring observation is the drop in quarterback ADP, but it's not terribly different than your standard league ADP. In my opinion, this is because a lot of people are saving their 1st, 2nd, 3rd, 4th and 5th picks for running backs and wide receivers. A two quarterback strategy works exceptionally well in best ball leagues like MFL10's.

Now I'm going to walk you through each position and rank the guys I like the most in the rounds they're available based on ADP. For up-to-date projections please check out our premium draft guide and cheat sheets.

I'm recommending a quarterback by committee strategy for best ball formats of any type. Target 2 or 3 quarterbacks and avoid the quarterback position in the first 5 rounds unless a beast drops to you in the fifth. Here's who I'm picking and when I'm picking them:

If I draft QB in the rounds 6, 7, or 8 I'm waiting till after round 12 for my next QB pick or two. Positions run will obviously force you to adjust accordingly. I'm perfectly happy drafting my quarterbacks after the 8th round.

You'll want 5 or 6 running backs on your team. Since MFL10's are PPR scoring you'll find a ton of value in the 3rd-4th round and then there's plenty of high upside guys around 6-8. Heck, DeAngelo Williams can be had around the 12th round and he has RB1 value for the first 4 weeks with upside thereafter. For those of you lucky enough to snag a top 5 pick, I recommend Gurley if Brown is off the board, otherwise I'm looking for Lamar Miller in round 2. Besides those two running backs I'm looking for value in round 3 through 8. Don't forget to target PPR backs projected for at least 40+ receptions and get at least three starting quality running backs before the 8th round. Here's who I'm picking and when I'd be most comfortable drafting them based on ADP:

You're going to need about 7 or 8 wide receivers to really lay the smack down. I want at least one stud on my roster: Antonio Brown, Odell Beckham Jr, Julio Jones, DeAndre Hopkins and A.J. Green come to mind in round #1. Even if you get a WR in round #1 there's no issue with going WR in round 2 for someone like Jordy Nelson, Alshon Jeffery, Brandin Cooks or Mike Evans. But listen, WR points are cheap and with 7 or 8 wide receivers on your team all you really need is a bunch of high ceiling guys. Wide receiver is a position I'm looking at in every round, those high value guys that fit our mold of high ceiling. Ideally, you've wrapped up 5 or 6 WR picks by round 10. Here's who I'm drafting and when based on ADP.

I like to roll with 3 tight ends with my third pick being a late pick (sub 15th) like Ben Watson or Jordan Cameron. Pass on the early TE picks because the three you draft should balance out those high scoring games the studs will produce. Beware of the TE run, if 6 or 7 TE are off the board you need to jump on the train! Here's who I like and when I'm drafting them based on ADP.

You'll want 3 team defenses to ensure you don't drop some negative points at the team defense slot. I'd only stray from this if you snag two top tier defenses. Every draft is different but I expect you'll be able to draft the following team defenses in or after the 15th round.