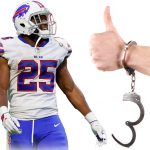 Drafting a running back handcuff is one of the more divisive concepts in fantasy football. Some owners appreciate the value of a backup “lottery ticket” who’s an injury — or a trendy suspension — away from stepping into a nice heap of volume, while others would rather pass on these Plan B stashes. While I […]

It is not a stretch to say that the New Orleans Saints have drafted well, by and large , since the Sean Payton era began in 2006. Starting that April, the Saints began laying the foundation for their recent run of success that includes 5 playoff appearances, 3 division championships, 2 NFC Championship game appearances […]