The strategy of grabbing as many big time receivers as possible is en vogue at the moment. The majority of fantasy owners should have a couple of rock solid wideouts atop their lineup, but there is always room to improve. The waiver wire is tough to manage early in the season. Roles are not clearly defined and speculation abounds. Nevertheless, here are the waiver wire picks leading up to week 1 of the NFL season. 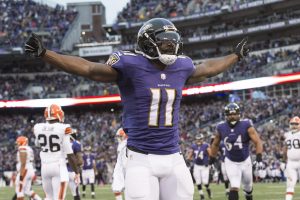 Aiken is not likely to be available in many competitive leagues. He looks like the clear cut top receiver in an offense that is going to have to throw. The Ravens will probably not have a prolific offense, but there will still be targets available. Aiken proved that he can produce last season with a line of 75 receptions 944 yards and 5 touchdowns. If Aiken is not available, Mike Wallace is also a good bet to return to form this season (or something close to form).

The Bengals belong to A.J. Green and nobody can dispute that fact. After Green however, there are still a large number of targets up for grabs. Tyler Eifert is not going to be ready to go for a few weeks and that likely means that Boyd will have a shot at being productive. There is reason to believe that Boyd will flourish given enough targets and he should see a bunch.

There has been a groudswell of support for Tajae Sharp because he has been very strong in the preseason. Seeing a good preseason performance is nice, but I have watched Matthews be productive in regular season games. Not only that, but he has produced on a team packed to the gills with wide receiver talent. In general, it is wise to have more polished talent on fantasy football rosters. In this case, Matthews has a proven track record of success. If Sharpe is the player available, however, he is also worth a speculative add.

Much of the talk surrounding Cleveland's receivers has been about Josh Gordon and Corey Coleman, but that is leaving out a talented pass catcher. Terrelle Pryor has had nice chemistry with Robert Griffin III this preseason. They have connected repeatedly, including for a deep touchdown reception. Pryor should see plenty of opportunities early in the season because Gordon does not return until week 5. At that point it may be a battle between Coleman and Pryor for the starting job. At the least, Pryor looks like a good candidate to stay in the mix all season long.

The Steelers have a glut of wide receivers, but Rogers seems to have the edge over Sammie Coates for the third wide receiver spot. The upside of Rogers is less impressive due to Coates big play ability. Playing Rogers in the three wide set however, allows the Steelers to have Brown and Wheaton on the outside. If Coates were to start, it is likely that Brown or Wheaton would play from the slot to accommodate his different skill set. At this point, most Steelers wide receivers have value but this will change when the rotation becomes more clear.