If you followed my heat map last week you did very well in DFS land, I sure did (finally!). Headed into week 15 we have another tough slate of games to choose from. The cold weather is limiting the number of "hot" receiving match-ups and making our picks even more difficult. I've included the rushing stats allowed so you can spot the funnel defenses a little easier.

Defenses Funneling to the Pass

DAL, TEN, NE, NYJ and DET are all solid versus the run but have been generous versus the pass. Look here for better than expected passing match-ups. Guys like Eli, Winston and Siemian (to a lesser extent) could find success this week.

Defenses Funneling to the Run

DEN, SD and BUF are content allowing RB's to "get some". You'll see higher volume out of guys like Crowell, L. Murray, and Blount this week.

The heat map is pointing us toward the receivers / quarterbacks on ALT, BUF, KC and SD this week.

The heat map is pointing us toward the running backs on CLE, SFO, ATL and BUF this week.

DVR - In the heat map below you'll see the DVR next to each receiver type. DVR is the DVOA ranking for each defensive unit versus said position. 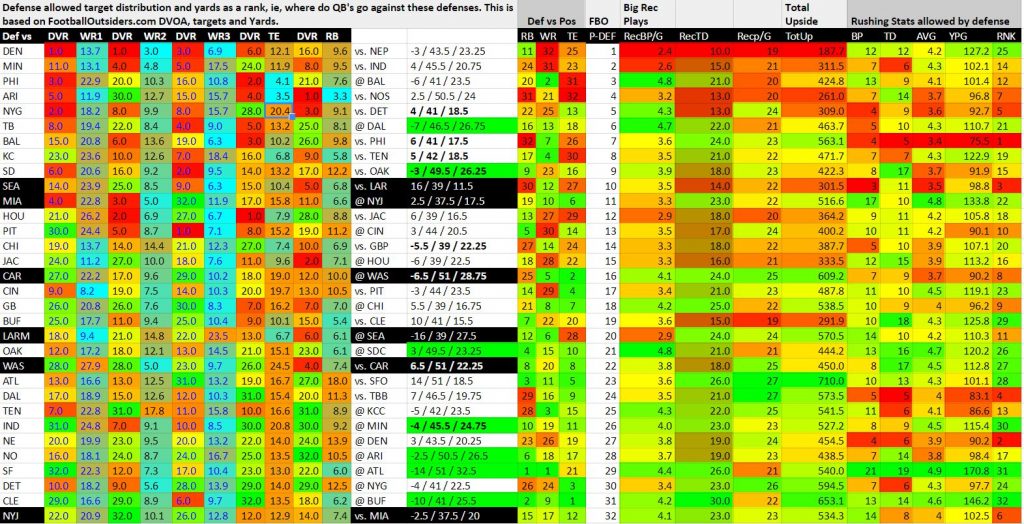