Each week there are plenty of players putting up numbers that nobody saw coming. Already in week 5 Jeremy Kerley has put up a huge total for the 49ers. There are bound to be other lightly owned commodities that can return good numbers for fantasy football sleeper picks.

The Broncos are a ready made team that any decent quarterback can run. Trevor Siemian has been doing a nice job, but an injury has opened the door for Lynch to start. Last week Lynch went 14-24 for 170 yards and a touchdown in relief. Week 5 brings a matchup with the league worst Falcons secondary. Even a rookie should be able to carve up this unit with Demaryius Thomas and Emmanuel Sanders in the mix.

In Case You Missed The Waiver Wire Picks

Most of the buzz in Oakland surrounds teammate DeAndre Washington and for good reason. With Murray set to miss time, Washington looks like the best bet to put up numbers, but the coaches have said that this backfield will be a timeshare. Richard has very limited NFL experience, but he broke a 75 yard run in week 1. The Chargers defense is abysmal so just about every Raider has some appeal in week 5.

The Lions are beat up at running back and Theo Riddick will be the main benefactor. Riddick is a versatile back and should see most of the touches. Zenner should be in the game for tough between the tackle runs and possibly goal line duty though. There is a decent chance that Zenner picks up a short touchdown run in this game and that is pretty decent for a player available in basically every league. 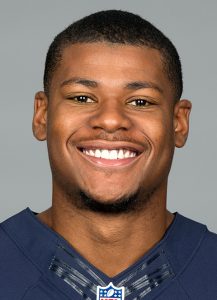 With the injuries sustained in Chicago, Meredith is basically assured a starting wide receiver spot in week 5. Alshon Jeffery is questionable as always, Eddie Royal may not play, Kevin White is done for the year and Marquess Wilson is weeks away from returning. While Meredith may not have earned this opportunity necessarily, he is still getting it and some decent volume should be the result. Just about anyone can beat the Colts defense so there is a real chance that Meredith puts up high end WR numbers in week 5.

Week 4 brought some decent numbers for little used bench player Brice Butler. He had a nice rapport with Dak Prescott which resulted in a line of 5 receptions 41 yards and a touchdown. It looks like Dez Bryant will miss another game in week 5 meaning that Butler could be in line for an increased role once again. The anticipation shown by Prescott and Butler is gold for fantasy owners and should result in another usable total versus the Bengals.

This troubled tight end has failed to live up to his potential so far in his young career. Lack of talent has never been the problem, though. The Jets have decided to give Seferian-Jenkins a second chance in the NFL. More importantly, he might make his debut for them on Sunday. This pick is obviously dependent on his actually playing, but the Jets should be throwing a ton and Seferian-Jenkins is an intriguing red zone target.