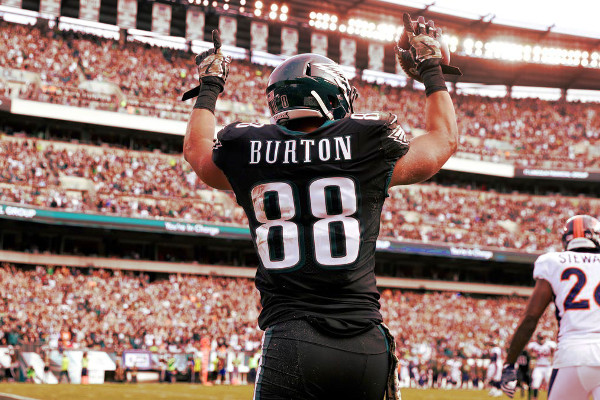 Tight end is the most feast or famine position in fantasy football. If you aren't sipping the froth off a tasty latte, you're choking down stale coffee grounds. True to form, there seems to be a pretty substantial drop-off at the tight end position after the Big 3 -- Gronk, Ertz, and Kelce -- and another significant tier break after safer guys like Kyle Rudolph and Delanie Walker are off the board.

Drafters may feel like they've missed out on all the "elite" options at the position and could be compelled to wait and grab a tight end flyer in the bowels of the later rounds. But there's another option in between the marquee names and the dart throws, and his name is Trey Burton.

You've likely heard Burton's name brought up in many a fantasy circle since he was traded to the Bears. But is he worth the hype?

The words "Andy Reid coaching tree" usually make fantasy analysts look for a change of pants, and Matt Nagy's connection to Kansas City is no different. We've seen how dominant tight ends have been under Reid, so the possibility of Nagy bringing that heavy action to Chicago gets the salivary glands going.

In the 2 years before Nagy became Kansas City's offensive coordinator, the Chiefs targeted their tight ends 129 and 125 times, respectively. When Nagy took over the OC job in 2016, that number jumped to 157. And in 2017, it jumped even more to 171. And when Nagy stepped in as the play caller toward the tail end of the season, Travis Kelce averaged an extra 1.2 targets per game.

And by all accounts, Nagy hasn't shied away from the Travis Kelce comparisons. According to Bears' GM Ryan Pace, one of the first serious talks Nagy had with his new crew was about the need for a U tight end.

“There was a clear vision for Trey, how he fits, and how he’ll be utilized... There’s also the extra bonus that he’s familiar with the offense.”

Burton will likely be moved around the formation while Adam Shaheen and/or Dion Sims play the more traditional, in-line tight end role.

As with any skill position player, his outlook is only as rosy as what you can project from the guy getting him the ball. Mitch Trubisky underwhelmed last year, but his performance was to be expected for a rookie being thrust into a tough offensive situation. I fully expect Trubisky to take a step forward in his 2nd year, but exactly how big of a step depends on how quickly he can transition into Nagy's new look offense.

For now, let's look at an important stat thread from the Bears' QB in 2017.

Trubisky's overall completion percentage put him at 27th amongst all starting quarterbacks. If his tight ends didn't frequently bail him out of trouble, he would have finished dead last. It's obvious Trubisky must work on his all-around accuracy, but this number also suggests he will lean heavily on the tight end position while he works out those growing pains.

Oh by the way, Burton's average catch percentage over the last 3 years is 70.3%. As far as security blankets go, that's not too shabby.

Burton Has Produced When Given The Chance

Burton spent the first four years of his career languishing behind Zach Ertz on the depth chart because...well, he wasn't as good as Zach Ertz. Few tight ends are. But Burton doesn't have to be better than -- or even as good as -- Ertz as a football player to make a fantasy impact for you this year. He just needs opportunities.

Here are what Burton's numbers look like when Ertz was out of the lineup for the entire game:

If you were to stretch those averages out across an entire season, that's good for 51 receptions, 733 yards, and 13 TDs. Those numbers last year would have made him the TE4, just a hair below his good friend Zach Ertz. For the sake of argument, let's drop that outlandish touchdown number down to a more reasonable 8. That still would have tied him with Jack Doyle for the TE6 position.

If he's the primary receiving tight end, he's a guaranteed Top 10 tight end who could nip at the heels of the Top 3.

Burton's ADP of 8.01 makes him the 9th tight end off the board, and that asking price is completely fair. It's also the sweet spot for drafting a tight end this year.

First of all, the risk is very minimal. Say you take Burton to start the 8th round, with 3 or 4 running backs and wide receivers already rostered, and he whiffs. I'm talking a full-on Martellus Bennett situation. You're not out the same extravagant cost as if you'd taken a "stud" like Jimmy Graham in the 5th round. But you're still getting the same kind of upside.

There's also much less risk than drafting fellow 8th-rounder Jordan Reed, who may not see the field for half the season due to impending injuries.

If you're confident enough in your Top 3 picks at RB and WR, I'd strongly consider taking Burton in the 7th. If he's there in the 8th, he's a sure thing. If he somehow falls to the 9th...DO NOT PASS ON HIM.